All Business Centers in Frankfurt

Looking for individual workplaces in Frankfurt? AllOfficeCenters – Europe’s leader in commercial rentals – provides all available flex office locations at a glance. No matter if you are a sole proprietor, an SME, or a large company, we team with you to find flexible workplace solutions in equipped business centers that meet your requirements.

With the help of our location map, you can filter selections and take advantage of our free consulting service regarding all contractual and pricing options. Our specialists will be glad to support you personally via +49 69 588 043 100 – free of charge and without obligation.

This brand-new Frankfurt business center boasts high-quality flex space in one of the city’s most exclusive locations. Spread over 2,600 m², this exceptional center includes 139 workspaces, 55 offices, and 5 conference rooms, and 8 silent cubes all with first-class furnishings and exceptional service.

The business center is located in the middle of the city center of the strong financial and business location, Frankfurt. The center is easy to reach by public transport and car. You will find your parking spaces in the center's own underground garage. Public parking garages are available in the immediate vicinity. Moreover, countless fancy cafés, restaurants, and sights are nearby. These make every lunch break unique and also invite you to spend long evenings in the direct neighborhood after business hours.

The modern premises are located in an impressively designed new building and bring you numerous benefits as a ’’FlexSpace’’ member. In addition, a cozy lounge offers enough space for a lively exchange and active networking. Use one of the many rooms for internal meetings or the reception of important business partners and benefit from the productive, stress-free working atmosphere.

The Omniturm is a 190-meter-high, architecturally innovative high-rise building that houses residential floors in addition to FlexSpace spaces - unique in Frankfurt. Multi-award-winning architect Bjarke Ingels designed the building, which meets perfectly the needs of today's and tomorrow's lifestyles. Here you will find "next-gen" spaces for businesses with, particularly high standards.

This center provides a unique, inspiring atmosphere and offers a high quality of stay. In addition, the exclusive 22nd Lounge and Bar is located on the 22nd floor of the building, where you can enjoy the evening after work with a breathtaking view of the city.

In the middle of the banking and business district: The Taunusturm is undoubtedly in one of Frankfurt's best locations. The business center features excellent equipment and offers its tenants modern, exclusive furniture in real wood, combined with a bright and high-quality design of all rooms.

Comfort, well-being, and harmony are the main features of this office center. The property is realized with generous window areas for light-flooded offices and a pleasant working atmosphere. A special architectural feature of the Garden Tower is the twelve winter gardens that have been cut into the facade.

The Taunusanlage business center is located in the heart of Frankfurt's banking district. Teams of all sizes surely will feel at home at this flex location with on-site staff, high-quality lounge areas, and private phone booths. This is where creative projects are launched, success stories are written, and new collaborations are established.

Due to its location in the city center/financial district, the Opernturm is easily reached by various means of public transport. The main train station and the trade fair area are a few minutes away, and the airport is a 20-minute drive away.

The office center Marienforum is located in a prime Frankfurt location and impresses with its modern appearance, stylish interior design, a variety of restaurants, stores, and opportunities to meet like-minded people. It is only a 10-minute walk to the main train station, a 15-minute drive to the airport, and the S-Bahn stop ’’Taunusanlage’’ is in the direct neighborhood.

This business center offers plenty of space and all the prerequisites for successfully realizing "New Work". On more than 4,500 m², companies have the opportunity to work on a daily creative to start a new cooperation with other companies and exchange themselves daily with like-minded people from the same industry area.

Let us point out just one highlight of this business center: the private dining terrace, which offers a remarkable view of downtown Frankfurt. The rooftop lounge is also the ideal location for spectacular events. Another special feature is the free bicycle rental service, which allows you to quickly get to the pleasant banks of the Main River or another city location during your lunch break.

Business Centers in Frankfurt am Main

All of our workspaces are based on the Office-as-a-Service or Space-as-a-Service (SaaS) model, meaning all spaces are fully furnished with offered high-speed Internet, 24-hour access, and other individual services. For example, the use of the kitchen, conference rooms, and break-out areas is included. Learn more about additional specific features on the respective office detail pages or also in our FAQ.

Renowned Business Addresses for businesses of all sizes

The flexible rentals in the Main metropolis are in great demand. Fortunately, we can help you find short-term availability at even the most exclusive addresses. Business centers can be found in locations such as the financial district (Central Business District), throughout the city center, and on the Zeil, in the showcase districts of Gallus, Messe (Frankfurt Fair), Sachsenhausen, Westend, and Ostend. The portfolio also includes the international hub of Frankfurt Airport and the more rural districts such as Rodelheim, Niederrad, and Fechenheim.

No matter your preferred location, Frankfurt is a cosmopolitan city with global networks and relevance. Experience optimally developed infrastructure with suburban trains, subways, buses, and streetcars, plus direct connections to other major cities throughout Europe. As home to diverse industries and nationalities, high quality of education, renowned research institutions, Frankfurt is a city of culture.

Find the perfect Flexible Workplaces for your team in FFM

Because the city is a world-class financial center, there are several available commercial spaces. Frankfurt’s skyline is eyecatching and dotted with numerous office towers. Inside these highrises are flexible workspaces with stunning views.

To help you navigate the immense selection of flex office solutions, our team at AllOfficeCenters assists you in your search. Boasting an extensive catalog of features and extras, we will help you find suitable room layouts and optimally sized offices. Feel free to contact us, and together we will find the perfect business center in Frankfurt on the Main for you. 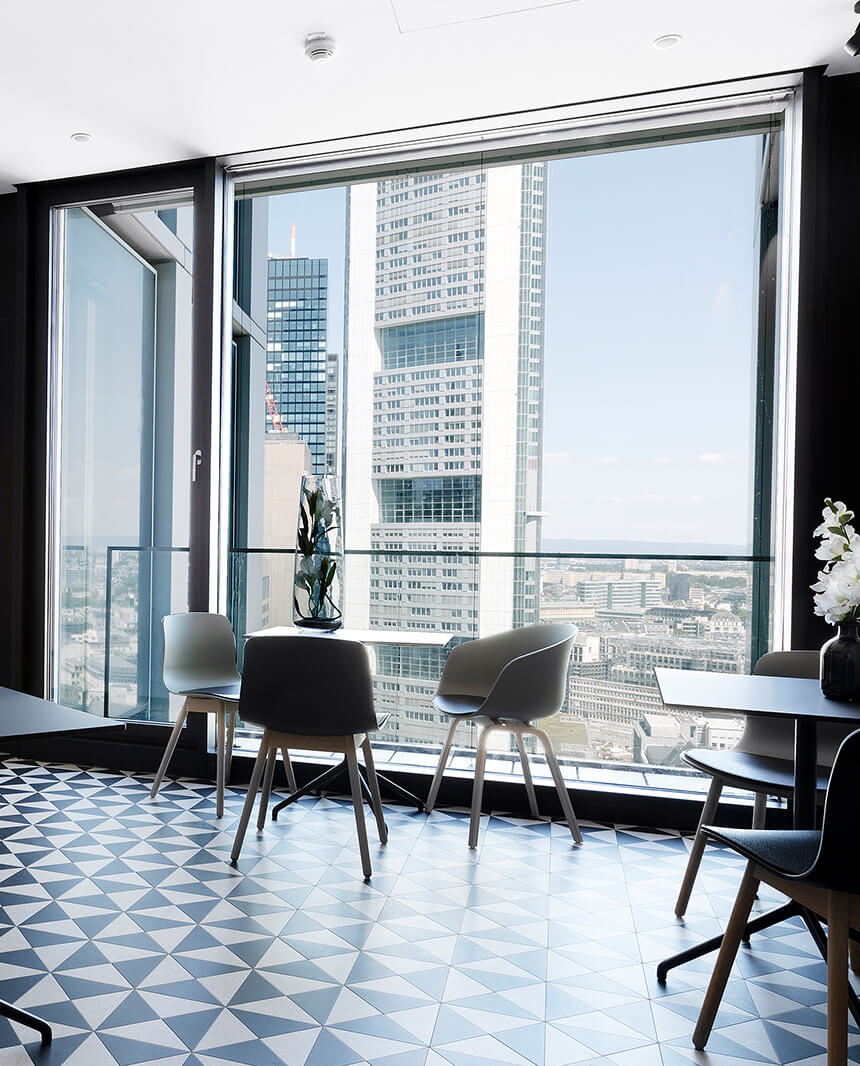 Frankfurt’s skyline is eyecatching and dotted with numerous office towers. Inside these highrises are flexible workspaces with stunning views.

Business Centers in Frankfurt offer you these advantages:

With only 750,000 residents, Frankfurt am Main isn’t thought of a sprawling city. That said, thousands of employees commute to the prosperous Hessian metropolis every day. The city is a financial center of international standing, with an unparalleled dynamism in its industries. The numerous high-rise buildings in the city center are home to leading representatives of many industries worldwide – in addition to the numerous banks and financial service providers, there are plenty of creative agencies, chemical groups, and IT service providers.

In economic terms, the Main metropolis is as impressive as its famous skyline – over 63,000 companies providing more than 650,000 jobs to offer here. A per capita gross domestic product of approximately 98,000 euros makes Frankfurt the economically strongest city in Germany. The international character is also remarkable; around 20% of all companies come from abroad, including Nike, Dell, and Motorola. In view of promising industries such as fintech, biotechnology, telecommunications or IT, the city will continue its economic growth.

The premium city of the Rhine-Main region

Thanks to its central location within Europe and the world, Frankfurt is considered a hub for global traffic and supply chains. The city also shines because of its infrastructure. The famous airport is one of the largest in the world, and every year millions of people are drawn to Frankfurt’s international trade fairs. Companies located here tap into innovation and an educated workforce. In fact, over 60,000 students, 15 universities, and three Max Planch Institutes call the city home.

The famous German city has a lot to offer in terms of tourism and culture. After business meetings, explore several museums and galleries, a multifaceted theater scene (which goes far beyond the famous Alte Oper) and a lively clubs. In addition, enjoy parks and greenery – nearly 50% of the city’s area consists of parks and bodies of water! That makes living and working in Frankfurt a truly cosmopolitan experience.

It’s no wonder that many freelancers, founders, start-ups, and enterprise companies are drawn to the city. If you are one of them, AllOfficeCenters is your contact for your customized serviced office solution in and around “Mainhattan.” 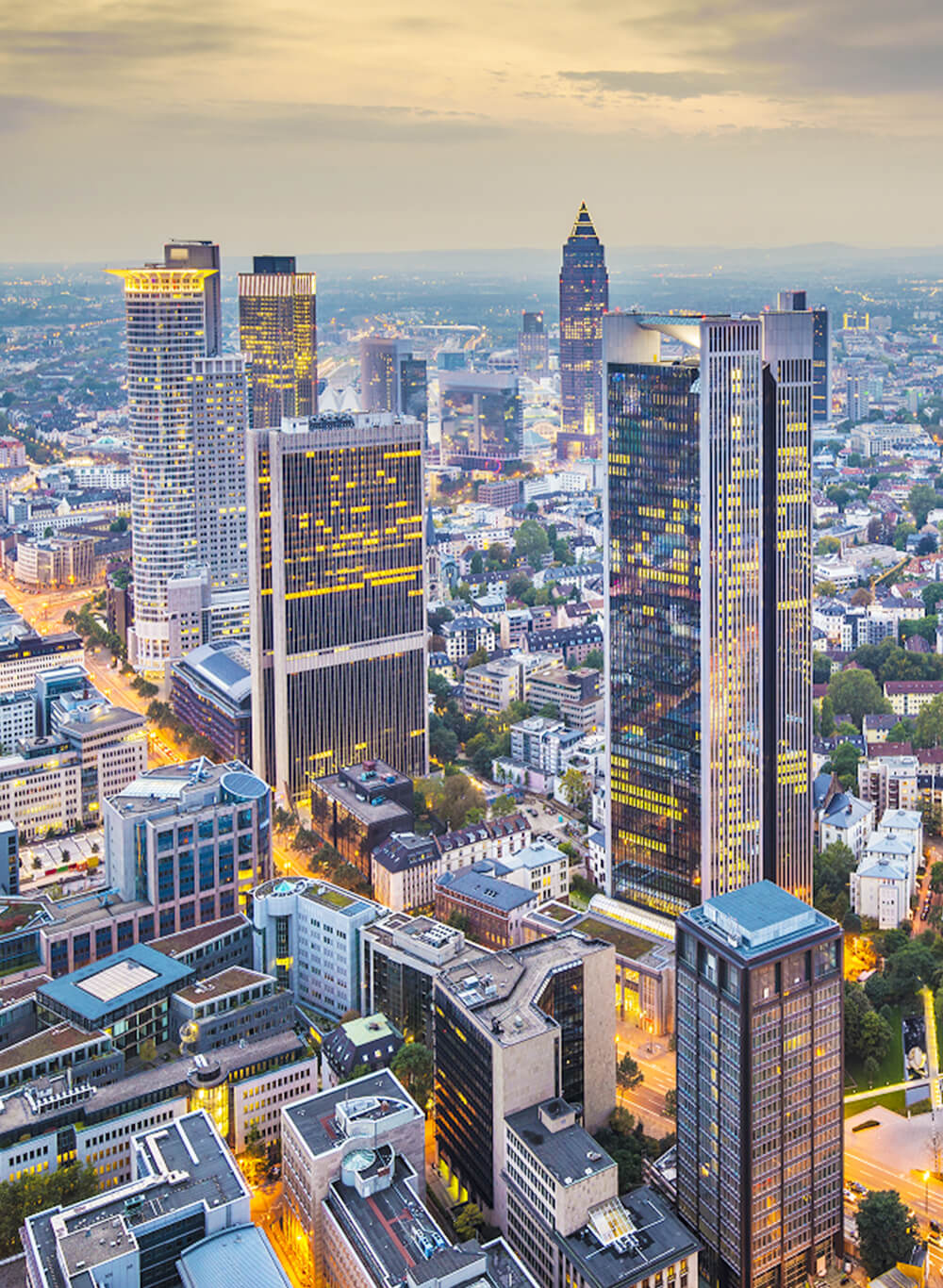 It's no wonder that many freelancers, founders, start-ups, and enterprise companies are drawn to the city. If you are one of them, AllOfficeCenters is your contact for your customized serviced office solution in and around "Mainhattan."