Are you looking to rent an office in Düsseldorf? AllOfficeCenters can offer you a complete overview of all availabilities. Our team of experts is there to personally help you along every step of the way in finding your ideal office – 100% commission-free!

Use our map for a quick and easy way to find the corporate space you need – whether it be in the Old Town, Carlstadt, Friedrichstadt, or the Medienhafen. You can browse through all available offers and directly request all information and prices for the office of your choice. From private to team, to open-plan offices, there are optimal solutions for companies of all sizes, for 100 or even over 500 employees. With our help, you are sure to find what you are looking for!

Located in the vibrant center of the city, the location of this commercial complex is hard to top. In the immediate vicinity are a variety of restaurants, cafes, and shopping options. In addition, the location is ideally connected to public transport.

The individual office spaces (ranging from 12 - 900 m²) are very well cut, bright and friendly. Each space, whether private office, double office, or larger team space, reflects your personal style. You can set up your office space as you like – and each office has internet access with structured network cabling and VLAN.

This property is located directly on the KO-Graben on Konigsallee in the Girardet House, which was built in 1906. A unique working environment has been created on this space, with 21 fully equipped offices between 10 and 1,700 m².

In this property, you can rent office space of various sizes, equipped with ergonomic furniture and customizable IT infrastructure. You can expect 17 private offices of various sizes, as well as a number of individual office workstations. All premises are furnished to a high standard, lockable, and cleaned daily.

The central location between Carlsplatz and KO is perfect for setting up professionally and getting started – whether for a day, a week, a month, or longer. Meet colleagues, invite clients, or brainstorm with your team – in the middle of Dusseldorf's business district. It couldn't be simpler or more efficient.

This brand new property in Dusseldorf Rath has a large number of modern office spaces at flexible contract terms. Here you can expect 60 private offices and two spacious meeting rooms for your meetings. Exactly the right offer for anyone looking for a prestigious workplace in the Rath district.

Not only employees but even tourists flock to the iconic "Dancing Towers" at the Neue Zollhof every day. A look at the photos explains why. As for the available office space, it can be rented from 10 m² and is all state-of-the-art. Of course, this property is also ideally connected to public transportation.

This office building is located in one of the most central locations where you can rent an office in Dusseldorf. By public transport, you can easily reach the main station by streetcar or bus. Furthermore, you need only a few minute's walk to many famous restaurants with a wide range of gastronomic offers.

This state-of-the-art property offers the latest offices and conference rooms. The office complex covers the top 5 floors of the commercial building in the center of Dusseldorf. The premises have been designed in a refreshing and creative way and will enhance your motivation.

This office building is located directly on the famous Konigsallee Boulevard, also known as KO. The shopping street is characterized by exclusive stores, shopping centers, and hotels. An excellent office location for teams of all sizes!

The GAP15 property, completed in 2005, is located in an ellipse-shaped, fully glazed office tower that is considered a new landmark in the city. Through the impressive ten-meter-high, completely light-flooded entrance hall, your customers enter your fully equipped, flexibly selectable office spaces.

The best offices for rent in Düsseldorf at a glance!

If you are interested in renting an office in Düsseldorf, our real estate team will give you experienced and impartial consultation to help you find the perfect location – free of charge and without any obligation on your part. No matter the type of company or budget, we are sure to find the right office space for you. The rental spaces we offer are usually fully furnished and therefore ready-to-move-in and available for you immediately. The rental offices come in a wide variety of sizes and can also be subdivided according to your needs. Further customized services can be booked upon request. To find out more about individual features, click on the properties that interest you most or visit our FAQ page.

Our team of experts at AllOfficeCenters have access to and can arrange office spaces for you in all parts of the city: Königsallee, Stadtmitte, Carlstadt, Altstadt, Golzheim, Am Seestern, or Medienhafen – renowned locations that have different economic focuses. All of these locations offer advantages typical of Düsseldorf, such as direct public transport connections and a high purchasing power index of both customers and retail partners.

Take advantage of Düsseldorf’s professional flair and productivity! Countless opportunities await you in the metropolitan area. In this vibrant business location some of the biggest names in the beauty or telecommunications industry, such as Ericsson, Vodafone, or L’Oréal, could soon be among your direct neighbors.

AllOfficeCenters will help you find the right Rental Office – 100% commission-free!

Düsseldorf is economically speaking one of the best-positioned cities in Europe, making it a much sought-after business location. Because of this, conventionally available commercial space is at a comparatively low vacancy rate of less than 7% (as of January 2021), making it difficult for companies to find suitable office space here. However, because AllOfficeCenters specializes in flexible office solutions, we can locate short-term availability for you in all the city’s top locations.

One of the most popular office spaces in Düsseldorf is the Medienhafen with its wonderful view of the magnificent Rhine River. In addition to such highly exclusive locations, there are rental options in all price ranges. With AllOfficeCenters by your side, you benefit from flexible contracts that are tailored exactly to your needs: short-term lease agreements, room layout, size, and services – you only pay for what you need and want. Contact us personally for further details and commission-free advice from our team of experts. 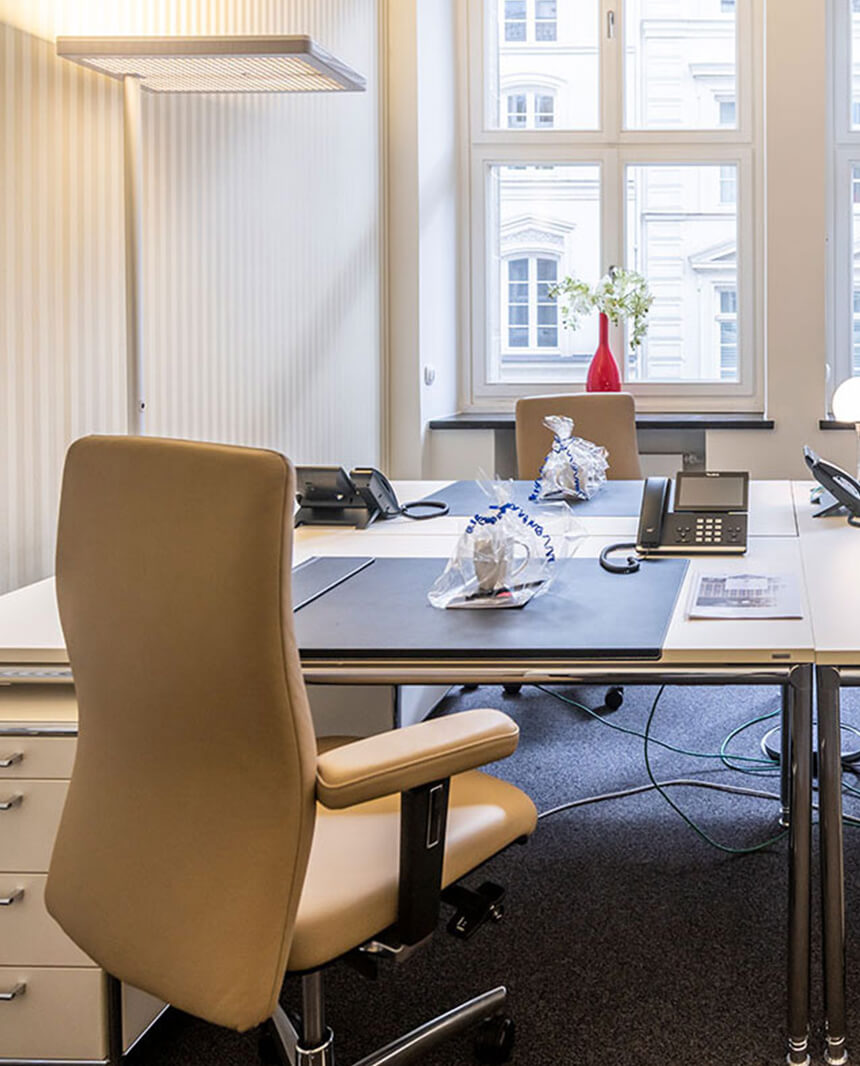 Benefit from flexible contracts that are tailored to your needs in terms of duration, room layout, size, and other services!

Flexible Office Space in Düsseldorf comes along with many extra features:

Office space for rent in Düsseldorf: Business location on course for growth

Düsseldorf, the capital of North Rhine-Westphalia, is one of Europe’s strongest business locations and home to more than 45,000 important national and international companies. The city has repeatedly been ranked among the top ten cities with the highest quality of life worldwide by the “Mercer Quality of Living Survey”. A total of 4.5 million employees contribute daily to further economic growth and the fifth highest GDP per employee in a nationwide comparison of cities. (Source: duesseldorf-wirtschaft.de)

What undoubtedly also makes the Rhine metropolis special is its fashion scene. It is home to respected fashion designers and brands, trade fairs, showrooms, boutiques, and beauty service providers. In general, creativity and innovation are among the most important economic drivers here: networks of international agencies, media companies, start-ups, and figureheads of the digital economy are all part of this region, as are the more than 20 international trade fairs that attract up to two million visitors annually.

Düsseldorf is home to nearly 170 banks, making the city the second-largest banking and stock exchange capital in Germany, next to Frankfurt on the Main. In addition to numerous high-tech companies, important representatives of the pharmaceutical, medical technology, and chemical industries are located here. Düsseldorf carries the titles “Center of the Telecommunications Industry” and “Number 1 Consulting Location” which refer to some of its core attributes.

The variety of strongly represented industries – together with the high standard of living, the well-developed infrastructure, and other highlights such as the “KÖ” (one of the highest-selling shopping streets in Germany) – makes the city attractive to students, business pioneers, and highly qualified professionals from all over Europe, ensuring a steady influx of talent for local companies.

In short, Düsseldorf is the perfect location for your company and the continued success of your business! 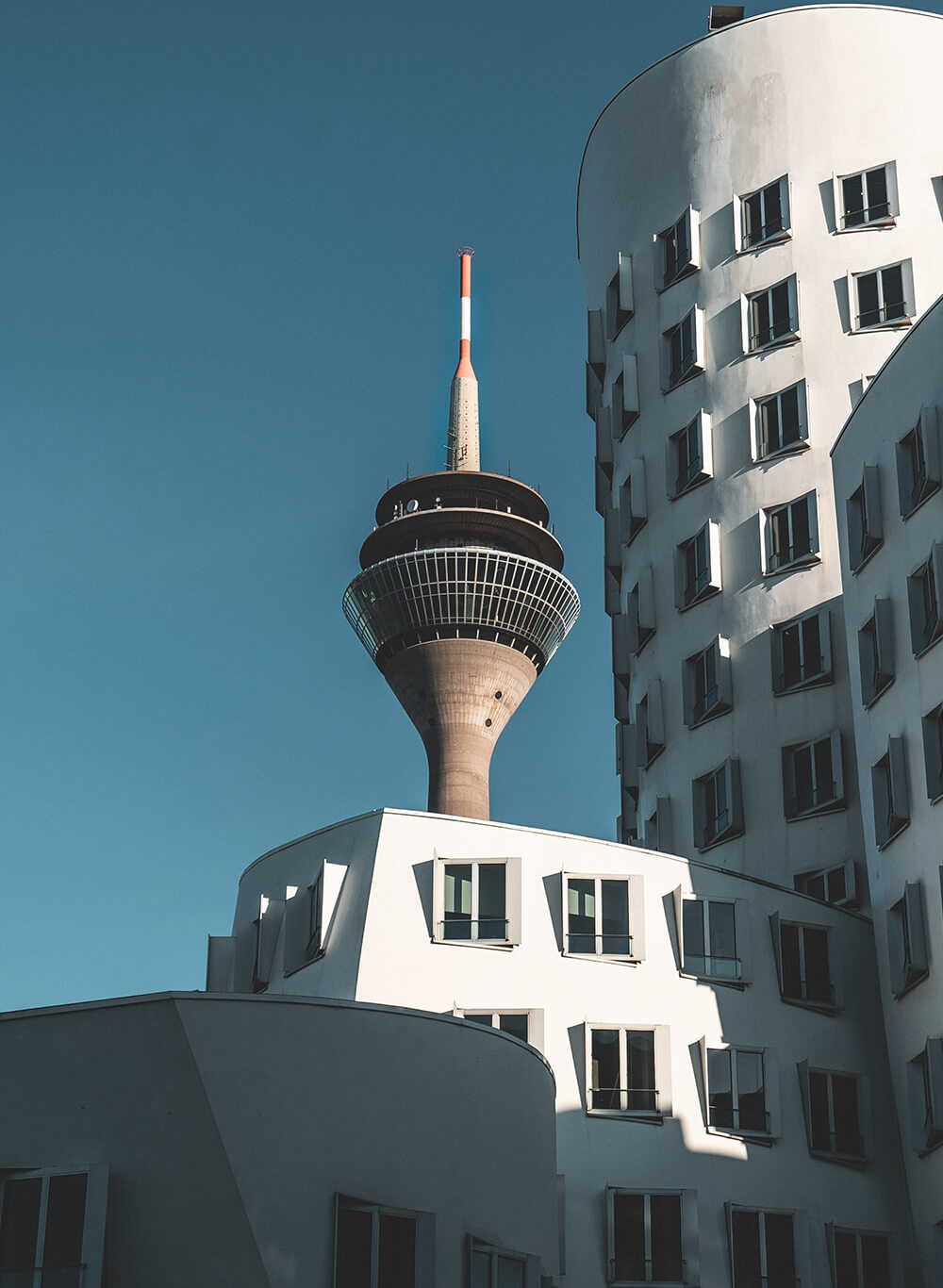