Searching for a rental office in Luxembourg? AllOfficeCenters, the leader in flexible commercial leasing, offers more than 20 fully furnished options throughout Luxembourg City and the surrounding country.

Our map page makes choosing the perfect location for your business easy. With prime locales for cultural-centric businesses near the Mudam Luxembourg Musee d’Art Moderne to scenic views of the confluence of the Alzette and Pétrusse rivers, there is something to meet every company’s needs. With many convenient locations available, we have the perfect solution in the country’s capital. Read more

furnished offices for 1-8 workstations which can be arranged at this office to suit your needs. Certain offices with a balcony or adjoining office. 2 furnished meeting rooms for up to 14 people. kitchenettes on all floors large kitchen with bistro tables and drinks dispenser. shower. IT room with individual racks available

At the heart of an elegant area with multiple mansions, a few minutes walk from the station, with all facilities of shops, restaurants; this office center opens you the doors of an opulent and charming building, completely renovated and functional. For your offices, meeting rooms, or receptions, areas designed to measure all your needs and service of reception and irreproachable services to value the image of your company and boost your business.

With the office space's unique interior architecture, its private and shared spaces, complete with meeting rooms, lounges, and events, you enter a place made to fulfill your entrepreneurial dreams.

Only a few steps from the historic office space center and the central train station, the Boulevard de la Pétrusse is certainly one of the most prestigious addresses in Luxembourg. furnished offices for 1-7 workstations which can be arranged to suit your needs, meeting room, kitchenettes on all floors, reception area exterior, parking spaces (park house 300 m away), and an IT room are given for your business needs.

Throughout the week a receptionist is responsible to welcome you and your guests to the office space in style and with great architecture. She will answer your questions in a friendly and personalized way and manage your mail in your absence. It will be held at your disposal to meet your professional demands and you will connect with partners and suppliers such as a business lawyer, accountant fiduciary, corporate formalities, translators, messenger, event management companies, IT service providers.

In addition to its prime location at the very heart of the Grand Duchy's capital city, this office space offers its customers a luxurious and tranquil working environment, while also providing an experienced team of professionals. This office provides its clients with bespoke solutions to meet their requirements by offering 40 brights, well-equipped luxury private offices, and meeting rooms for up to 100 delegates.

Only 15 minutes from Fidel Airport or the Central Station, this office space is located on the 4th floor. The building proposes facilities such as a concierge service, a fitness center, and a daycare. Overall, the perfect place to work with a team of any size.

The office spaces’ 2,000 m² offers about 50 fully equipped offices from 15 to 300 m², all having innovative high technologies, furniture of contemporary design, and soundproof walls, the perfect place to work with a team of any size. Its proximity to highways, thus connecting your office to Germany, Belgium, and France assures the international development your affairs may require

This office center offers fully furnished offices, in the heart of Luxembourg. This historic building has been refurbished, adding a contemporary feel while maintaining its original features. It offers flexible office solutions, personalized services, and meeting rooms.

Looking for assistance to start up your open-plan office in Luxembourg or need any help with the administration of your company? This center offers office spaces and parking facilities, administrative services, secretarial work, bookkeeping, payroll administration, tax filing, and more.

Luxembourg’s best Offices at a glance!

Is your company looking to locate in Luxembourg and searching for the perfect leasing options? AllOfficeCenters is here to help you find the perfect location. All of our listings are fully furnished and complete with extra amenities such as conference rooms and ready-to-use kitchens. The flexible rentals allow your team to move in with minimal notice featuring lease agreements from a few months to multiple years. AllOfficeCenters will create a contract that meets the needs of your start-up or established business.

This country might be small in size, but it is known as a business powerhouse throughout Europe. Favored commercial regions include Place de Paris, Rue Glesener, Route de Longwy, Rue Goethe, and Strassen. Whether you are searching for a business location near Cathedrale Notre-Dame or looking for a contemporary office design with scenic views of Pont Adolphe, AllOfficeCenters staff can direct you to one of its over 20 locales in Luxembourg.

Utilize the convenient map tool to find the perfect building to locate your business. Available units range from renovated and modernized spaces to elegant options in historic districts. AllOfficeSpaces is Europe’s leader in connecting entrepreneurs with innovative rental options. We never charge for our advice, and there’s no obligation.

Every business has different needs, and you deserve an office designed to meet them. Whether you are looking for a private workstation or sleek units with the amenities for an entire company, there are options available.

No matter the size of the company, there are plenty of start-ups and multinational businesses wanting to become a part of the Luxembourg business environment. And when trying to scale your business, flexible rentals are a must. Contact our leasing experts today for assistance in locating the best office to enhance your innovation.

AllOfficeSpaces is Europe’s leader in connecting entrepreneurs with innovative rental options. We never charge for our advice, and there’s no obligation.

Rent Office Space in Luxembourg and benefit from multiple amenities:

Luxembourg: a political hub of the European Union

Though it is one of the smallest countries in Europe, Luxembourg is a political power. As the seat of the Court Of Justice Of the European Union, many political entities and businesses serving its needs call the country home, particularly the Kirchberg Quarter of Luxembourg City. A banking and financial hub, the country boasts one of the highest GDPs and is the second richest in the world.

A famous center of business and history

The largest commune in the country, Luxembourg City, features a population of just 125,000 residents. Perched high on cliffs and situated at the confluence of the Alzette and Pétrusse rivers, scenic vistas and old-world charm are the theme. The city boasts plenty of ancient architecture and takes pride in preserving its historic buildings. In 1994, UNESCO made it a World Heritage Site.

People from across Europe and the world travel to visit the city’s famous museums, particularly the National Museum of History and Art (MNHA), the Luxembourg City History Museum, the new Grand Duke Jean Museum of Modern Art (Mudam), and the National Museum of Natural History. Getting around the city is easy due to free public transportation on busses and trains

Landlocked between Germany, France, Belgium, the region is a cultural mix of those countries and home to several international businesses with roots across Western Europe. In fact, Luxembourg boasts three official languages, including German, French, and the national language Luxembourgish. Because foreign nationals make up over half of the country’s population, business is conducted in all three languages, along with English, making the region a haven for companies from across the world. The amount of foreigners continues to grow every year.

Contact the leaders in providing office space in Europe.
AllOfficeCenters is here to guide you to the perfect location for your company. 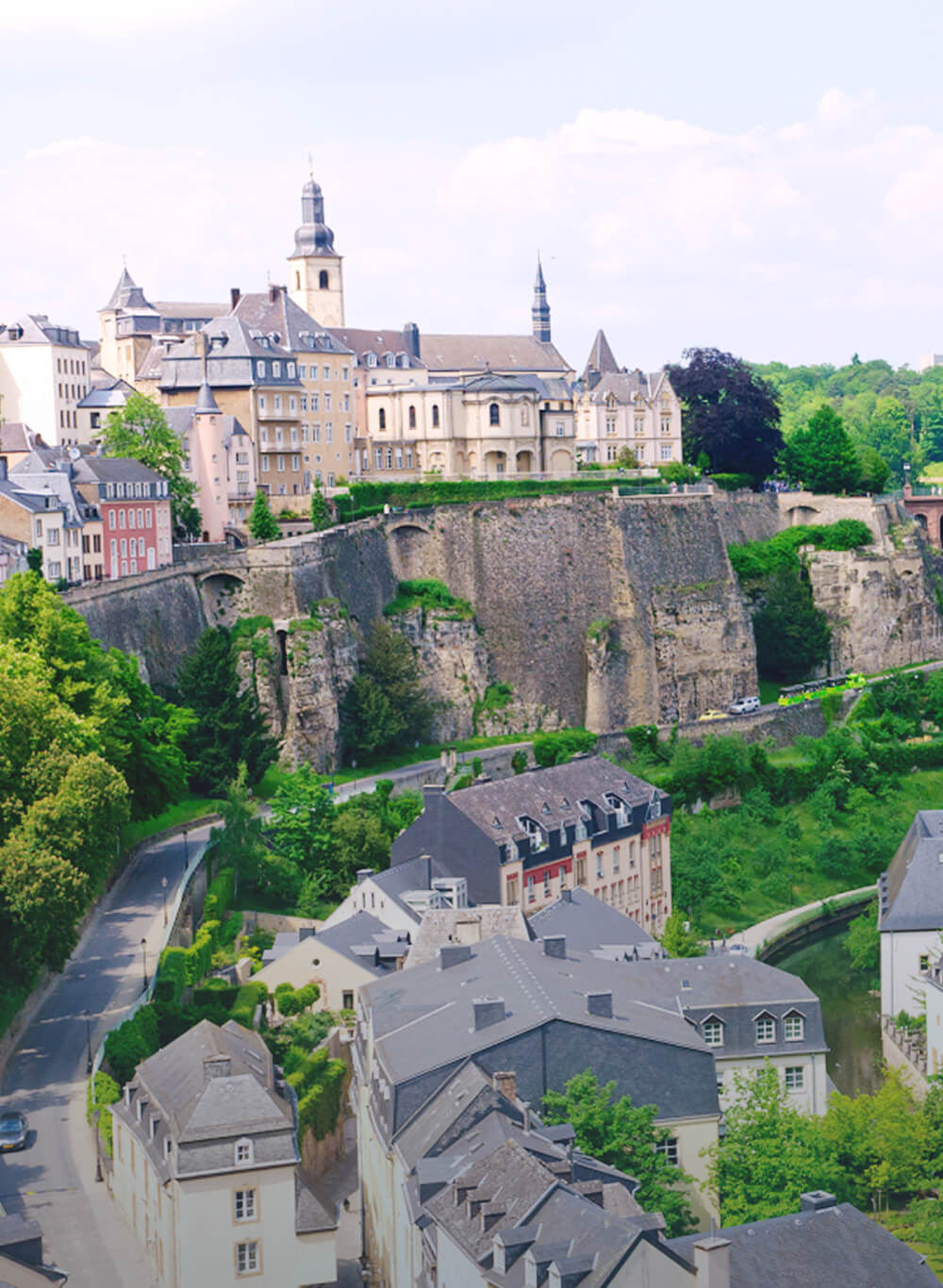